On 21 October, after months of build-up and anticipation, the four contestants selected to compete in the Toyota Fortuner 4x4 Challenge finally got the chance to show off their prowess at Pezula Hotel in Knysna.

This unique competition entails four public participants teaming up with four celebrities (or heroes in challenge speak), who are then required to compete in pairs alongside their trusty Toyota Fortuners in a series of challenges. The 2019 event marked the fourth installment of the competition, incorporating elements from previous years as well as some new ones. The challenges required a combination of mental and physical fitness, while cool and wet weather conditions brought their own difficulties. However, thanks to Garmin, Specialized and returning sponsor Salomon providing the necessary gear, the stage was set.

After the contestant-hero pairing took place by way of a draw, the teams were determined as follows: Trevor Lagerwey and Kirsten McCann; Michelle Meyer and Giniel de Villiers; Jacob Maboja and Nkateko (Takkies) Dinwiddy; and Dieter Pey and Oupa Mohoje.

The first challenge – aptly named Garmin Lifesaving Flags eliminator – consisted of a lifeguarding-inspired beach sprint at Leisure Isle. After knockout rounds, the last person standing would receive a starting advantage for the lagoon paddle race. Trevor Lagerwey earned this advantage, and being paired up with Olympic rower Kirsten McCann, it was no surprise when the pair placed first in the Knysna Lagoon challenge. For the second task contestants set off on a run, with navigational instructions provided by their Garmin Fenix 6 Plus smartwatches. After the run, teams had to identify 15 African countries on a map. Day 2 was a major competition day with five tasks on the itinerary. The day kicked off with the Salomon Trail Run, along the cliff paths of Cairnbrogie farm on the outskirts of Plettenberg Bay. To complete the challenge, teams needed to answer a Fortuner-related brainteaser and hit the horn to lock in their time.

Next up was the Specialized Epic Pump Track Challenge. For this, the contestant had to cycle along a challenging pump track, while their hero-partner called out navigational instructions from the viewing deck. The Toyota Obstacle Challenge required the four teams to set off and find key raft-building components using their Garmin Fenix 6 watches for co-ordinates. Once they had gathered all the elements, they had to assemble a raft (capable of transporting themselves across the dam), and make their way to the checkpoint. Strong headwinds made paddling almost impossible and in the end only two teams, De Villiers/Meyer and Lagerwey/McDonald, reached the checkpoint. 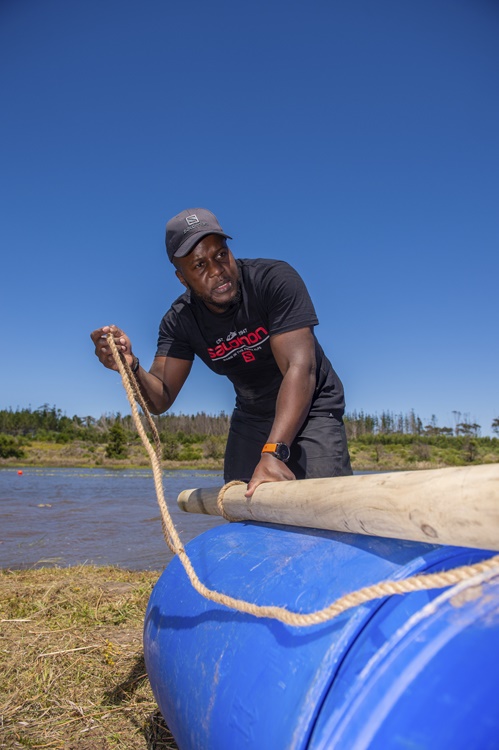 For task 6, the Toyota Blind Drive Challenge, contestants had to navigate an obstacle course behind the wheel of their Fortuner while being blindfolded! They could only rely on their partner’s instructions to guide them. This challenge required a balance of speed and precision, as a penalty system was in place. After a few anxious moments, all four teams (and their Fortuners) emerged unscathed.

The final challenge was clay pigeon shooting, and despite strong winds, a drop in temperature and grey clouds overhead, all four teams gave it their all. After two days of trials and triumphs, Trevor Lagerwey from Cape Town (who entered via Men’s Health magazine and was teamed up with Olympic rower Kirsten McCann) was crowned Fortuner 4x4 Challenge champion for 2019. Strong teamwork and consistency earned him the keys to a brand-new Toyota Fortuner 2.4 GD-6 4x4 6AT.

The three runner-ups did not leave empty-handed, though, as all the contestants received a Specialized Epic Comp mountain bike and cycling gear, a Garmin Fenix 6 Plus smartwatch and Salomon apparel worth more than R60 000.

Toyota South Africa Motors would like to thank the following sponsors and partners who contributed to another hugely successful Fortuner 4x4 Challenge campaign: