JY LEES NOU The Via Francigena: The where, why and how (far)

The Via Francigena: The where, why and how (far) Sponsored: What does the Via Francigena, also known as the “Italian Camino”, entail? And why have people been walking this pilgrimage for almost ten centuries?

This go! adventure has been made possible by Canon, Trappers, Rehidrat, Hi-Tec, Atlasware en caminoways.com.

If you’re considering doing a pilgrimage to “clear your head”, the Via Francigena (pronounced Frans-see-gee-na) is the route for the higher-grade kids.

Where the Spanish Camino de Santiago traverses roughly 1 000km (from St Jean to Finisterre), the Via Francigena runs over almost 2 000km – it starts in Canterbury in England, passes through parts of France and Switzerland and stretches from the north of Italy to the Vatican in Rome. (Via Francigena means “the route from France”).

You’ll have to cross the St Bernard Pass at some point if you hike the entire route. Although there is more than one route on the Via Francigena (you know the saying, “all roads lead to Rome”?), officially, the Via Francigena follows the route that Sigeric, the newly-appointed archbishop of Canterbury, travelled in the tenth century to receive his pallium (a woollen vestment) from the Pope in Rome.

Those 90 stages are still followed by pilgrims of today, more or less. If you want to see a summary of them, click here. The Via Francigena was first documented in 725. How does it compare with the pilgrimage in Spain?

As with the Spanish route, you can start and end your hike at any section. After all, there are no rules for a pilgrimage.

But if you want a certificate (“Testimonium”) from the Vatican that shows you completed the route (similar to the Compostela that Spanish pilgrims get), you have to at least hike from Aquapendente, about 180km from Rome.

The most important difference is that it attracts a lot fewer pilgrims than the Spanish route. Where 250 000 pilgrims apply for their Compostela each year as evidence that they completed the Camino de Santiago, only 2500 apply for their Testimoniums in Rome.

So you’ll encounter significantly fewer people on the route. If you’re concerned that the Spanish route is already too commercial, then the Italian route is a better option.

Fewer pilgrims also means less infrastructure, which already starts with the struggle to find informative research material on the route.

Where you can pick and choose between guides on the Camino de Santigo (in my humble opinion, Brierley’s is the best) there are just two guides in English about the Via Francigena: Alison Raju’s Via Francigena – Pilgrim Trail Canterbury to Rome, and Babette Gallard’s Lightfoot Guide to the Via Francigena.

Both warn that you can sometimes hike for an entire day without seeing another person, and of course you’re not going to encounter little cafes with refreshments around every corner. So, you’ll have to carry all the supplies you need for a day’s hike with you.

Where the Spanish Camino has an established tradition of pilgrims’ hostels, accommodation specifically for pilgrims is few and far between on the Via Francigena.

The guides provide a list of cloisters, B&Bs and tourist hotels that you can book into. Many of the pilgrims that hike during the summer months choose to just camp in the veld. But camping alone in a foreign country is just a little too adventurous for my taste, as a woman walking solo.

In Maggie Ramsay’s book The Italian Camino she recounts how she and her husband often couldn’t find accommodation in the towns. Busses and taxis (to get to the next town) are not as readily available as in Spain.

So I booked all my accommodation ahead of time through caminoways.com. 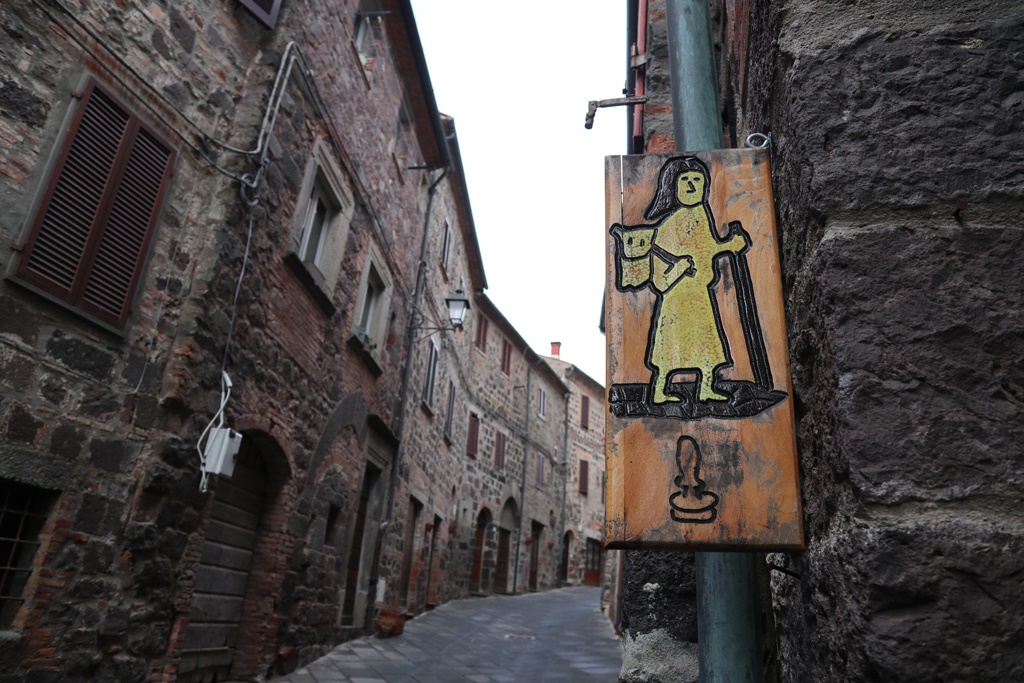 Which route should I take?

I decided on my route through caminoways.com before I started doing all my research, and happily realised afterwards that I’d incidentally had the right distances in my head to qualify for a Testimonium.

I intended to start just one stage before Aquapendente. Here is the complete list of kilometres that I planned to walk. I could download GPX files of the routes onto my Suunto watch ahead of time, so I’d know exactly how many hills I’d walk each day.

The GPX files are freely available on www.viefrancigene.org. This go! Via Francigena adventure is made possible by Canon SA, Rehidrat, Hi-Tec,  Trappers and Atlasware.

Caminoways.com organises walking and biking tours on a variety of Camino de Santiago routes. A six-day trip on the famous Camino Frances from Sarria to Santiago starts from 420 euro (about R7 000) per person sharing. (For details and a free quotation, contact info@caminoways.com or visit caminoways.com.)