Lots to learn after friendlies 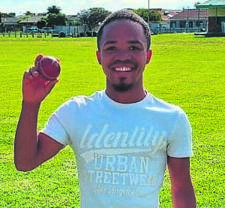 Morné Daars of Strand CC won the man of the match award in his team’s friendly against HHCC in Gordon’s Bay.

The home side won the toss and elected to take first strike, with the opening pair of Waqaar Josephs and Rashaad Salie starting brightly with a 50-run stand. Wickets then started tumbling at regular intervals and the SCC bowlers took control of the match.

HHCC were eventually all-out for 120, with Rashaad Salie (46) the only batsman with a meaningful score. Twenty-year-old Morné Daars was the chief destroyer with the leather for Strand, recording figures of 5/17.

In the bowling department, HHCC put on a brave fight, but the visitors proved too strong in the batting department, crossing the line in the 25th over with three wickets to spare.

Josephs and Yaasien Smith both picked up two wickets and were the pick of the HHCC bowlers, while SCC’s Daars was named man of the match.

The visiting captain won the toss and decided to field in overcast conditions. Rasool Thomas, the son of former HHCC and Primrose CC legend Yunus, grabbed the first wicket before rain interuppted play and the match was reduced to 45 overs.

The HHCC bowlers stepped up a gear and had Primrose at 103/7 at one stage. But the hosts steadied the ship thanks to a good partnership and eventually ended on 225/8 in 45 overs.

HHCC launched a cautious onslaught and moved slowly at 34/0 after 12 overs. They then quickly lost five scalps, only adding 12 runs to the score.

Thomas and Abu Bakr Brinkhuis brought some respect to the scoreboard with a decent 50-run partnership, but HHCC eventually ended their 45 overs on 168/8 and suffer 57-run defeat. Thomas (40), Brinkhuis (16), Yaasien Railoun (18) and Fuad Behardien (17) were the pick of the batsmen.

Volgende op Netwerk24
For the record